Brief History of the disaster

On February 11th 1813 a large number of open sailing boats were fishing herring in Bruckless Bay when a sudden violent storm drove them onto the rocks around St. John’s Point.  Most records state that 42 men were lost leaving 30 widows and 102 children.  This figure originates from a report on the storm by Rev. Edward Stopford, the Anglican rector of Killybegs, yet other eye witness reports state that up to 80 men were drown, the vast majority of them coming from the areas of Kilcar, Teelin and Malinbeg.   A death toll of this magnitude makes the disaster the worst fishing loss and the second worst peacetime maritime disaster in Irish recorded history being only topped by the sinking of the MV Princess Victoria in 1953 in which 133 people perished.  Many authors then and since ascribed a supernatural cause –  local author T.C.McGinley recounted a folk tale that the storm was brewed up by a witch performing incantations over a basin.  She was wreaking revenge for being scorned by the fishermen.   (Extract from Article in Donegal Annual 2012 by Aidan McConnell)
On Monday February 11th 2013 a  commemoration/memorial ceremony was held at a site below Castle Murray House to commemorate the bicentenary of what is known as ‘The Bruckless Drowning’ when 200 fishing boats capsized in a storm in Bruckless Bay on February 11th 1813 with the loss of many lives.
The commemoration was a comprise an Ecumenical Service and the unveiling of an engraved stone set in a landscaped garden overlooking McSwyne’s castle and Bruckless Bay took place.  Afterwards a lecture on the disaster was in Castle Murray House by Mr. Aidan McConnell (Bruckless/Dublin) who has published research on the disaster and light refreshments was served. Crowds came with representatives from all walks of life from near and far. 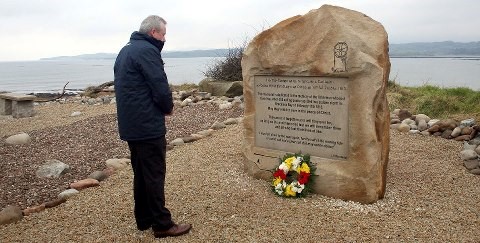